I am a London-based sociologist and writer. I’m curious about what people do together in communities. I like to hear people’s stories.

1 May, 2012 3:22 pm Comments Off on Who’s Afraid of Greater Luxembourg? – by Frank Jacobs (from the NY Times Opinionator Blog)

Borderlines explores the global map, one line at a time.

Luxembourg is about as cuddly as countries come: prosperous, picturesque and delightfully tiny. At 999 square miles, it is the smallest but one of the European Union states [1]. You could drive its length (55 miles) or its width (35 miles) in less time than it takes to watch a feature-length movie — provided you don’t stop at one of the many touristy villages or vineyards along the way. The capital, also called Luxembourg [2], is a cozy city of barely 100,000 souls; its major problem is not drugs or urban decay, but the apparently unfixable fact that it’s rather boring [3].

Luxembourg is the only country in the world ruled by a grand duke [4], which sounds more like the setup to a fairy tale than a real-world constitutional arrangement. The grand duchy is a founding member of the European Union and NATO [5], and hosts the European Court of Justice, Eurostat (the European Statistical Office), the Secretariat of the European Parliament and other supranational institutions. Luxembourg expects to be listened to and taken seriously by its international peers. And it is: of its last four prime ministers, one went on to become president of the United Nations General Assembly, another of the European Commission, and a third of the Eurogroup [6].

All that from a country less populous than Hanover, Germany’s 13th largest city. It is so small that even tiny Belgium is able to smirk about the grand duchy’s size, replicating the scorn heaped upon itself by its own larger neighbors. Why is Luxembourg so determined to punch above its weight? Could it be that it has a grander idea of itself than its neighbors have? An elevated sense of self is a useful survival tool, for countries as well as people. But Luxembourgers could argue that they don’t have delusions of grandeur, but rather memories of grandeur. Once upon a time, you see, there was a Greater Luxembourg. 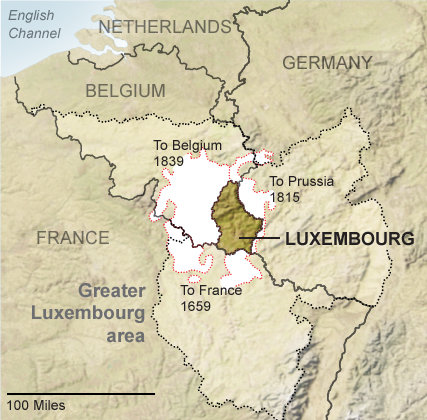 The state’s roots go back to 963 A.D., when Siegfried, count of the Ardennes, acquired Lucilinburhuc, an old Roman fort with a Frankish name [7]. Over the next few centuries, the House of Luxembourg would choose its wars and wives wisely, and the County of Luxembourg would grow to encompass an area four times the size of the present grand duchy.

Indeed, Luxembourg’s international ambitions, mainly within the vast and chaotic German Empire, are almost as old as the house itself. It produced three Holy Roman emperors, several kings of Bohemia and a fair share of archbishops. Perhaps Luxembourg’s most lasting impression on the empire was the Golden Bull of 1365, a decree that would determine how Holy Roman emperors would be elected for over four centuries, until the empire’s dissolution in 1806. It was issued by Emperor Charles IV of Luxembourg, king of Bohemia [8], who in 1354 elevated his ancestral county to a duchy.

Unfortunately, Luxembourg soon lost control of its own fate. In 1441 Duchess Elizabeth sold it to Burgundy; it later passed into Hapsburg hands and was eventually integrated into the Netherlands as one of its 17 provinces. Lack of an independent dynasty meant an end to Luxembourg’s influence in the world, and it eventually fell under the geopolitical knife. Like once enormous Poland, to the east, it suffered three partitions, resulting in the bonsai nation it currently is.

In fact, the three countries surrounding present-day Luxembourg all own territory that once belonged to the Duchy of Luxembourg, and they all at one point or another demanded its total annexation into their own territory. In 1659, the Treaty of the Pyrenees [9] accorded just over 400 square miles (or 10 percent of its size at the time) of Luxembourg to France, which gained the fortified cities of Stenay, Thionville and Montmédy. At the Congress of Vienna in 1815, Prussia got the fort at Bitburg, and all lands west of a new riverine border [10], further reducing Luxembourg by 880 square miles (or an additional 24 percent of the original). Part of these lands would go to Belgium after the Treaty of Versailles in 1919.

But the worst loss occurred in 1839, when the Netherlands accepted the Treaty of London, formally recognising Belgian independence. In return, the Dutch king William I got to keep the eastern halves of Limburg and Luxembourg, provinces which had nevertheless cheered on Belgium’s secession. As a result, the grand duchy lost its western half (1,687 square miles, or 42 percent of its territory at its largest extension) to Belgium, which still has a province also called Luxembourg. William remained grand duke of the eastern half of Luxembourg, establishing a personal union [11] with the Netherlands that would last until 1890.

And of course the country didn’t avoid the horrors of 20th century Europe, either: in the first half of the 20th century, Germany brutally occupied Luxembourg twice, annexing it outright the second time.

Read previous contributions to this series.

That list of unfortunate events would be enough justification for a grand duchy to be brimming with resentment, with local politicians falling over one another demanding the return of the lost territories, a condition common to many once grand nations. But political extremism is a fringe movement in Luxembourg politics —probably so small that it can be identified as that one guy fuming behind his Weissbier in a bar in Echternach.

Instead, Luxembourg has sublimated irredentism, that unpalatable side dish of nationalism, into something much more powerful. Outwardly, the Luxembourgers are the best students of the European class. Their national motto, rendered in Luxembourgish, is: “Mir wölle bleiwe, wat mir sin” (“We want to stay what we are”), a good summary of the folksy, don’t-rock-the-boat conservatism that dominates the political scene.

But the real slogan might just as well be: “We want to become what we were”: European power brokers, as they were in the Middle Ages. Luxembourg is stealthily positioning itself as the central pivot of a new supernational zone within Europe, generically called the Grande Région.

This Greater Region of Luxembourg is one of Europe’s many cross-border cooperations called Euroregions, welding Luxembourg with the Walloon region of Belgium (including its German-speaking area), the French region of Lorraine, and the German states of Saarland and Rhineland-Palatinate. The Greater Region [12] is much wider than the old Greater Luxembourg, comprising an area of 25,250 square miles and counting more than 11 million inhabitants [13].

Ostensibly only a forum to discuss economic, social, cultural and tourist affairs, the Greater Region of Luxembourg could nevertheless be seen as the inchoate resurrection of an ancient European entity: Middle Francia [14], the centerpiece of Charlemagne’s empire. It’s been a long time coming: While the empire’s eastern and western parts later evolved into Germany and France, Middle Francia — extending in a narrow corridor from the North Sea to the Mediterranean — did not survive its creation at the Treaty of Verdun, in 843 A.D., for very long.

Perhaps this is Luxembourg’s insurance policy in case the European Union goes to the dogs. Plan A is to be the best student in the European class, at which is excels. Plan B is to recreate Middle Francia, but this time as a viable third way between France and Germany. Middle Francia’s undoing was its lack of cultural cohesion. Perhaps the Luxembourgers, fluently trilingual, can turn that defect around to an advantage. And maybe one day, Europeans tired of a superstate dominated by France and Germany will resolutely declare, from Amsterdam to Athens: “Mir wölle bleiwe, wat mir sin.”

Frank Jacobs is a London-based author and blogger. He writes about cartography, but only the interesting bits.

[1] And about two-thirds the size of Rhode Island, smallest of the 50 American states. Luxembourg held the distinction of being the smallest member state until the 2004 accession of Malta, which is only 121 square miles in size, about twice the size of the District of Columbia.

[2] The French and standard international name of the city and country; in German, it is called Luxemburg; in Luxembourgish, it is called Lëtzebuerg. All three are official languages, with French the sole legislative language, German used for fiscal matters and in the press, and Luxembourgish (French vocabulary grafted on a German dialect) deployed in everyday conversations.

[3] So boring that at least one local girl found no way better to spend her spare time than to correspond with an adolescent, pre-famous Morrissey: “Spending warm summer days indoors, writing / Frightening verse to a buck-toothed girl in Luxembourg.”

[4] A grand duchy is a rare nomenclature, defining the sovereign territory of a monarch below the rank of king but above that of prince. One of the earliest, and longest-lived, examples is the grand duchy of Tuscany, which existed from 1569 to 1860. Napoleon created a handful of semi-independent grand duchies to solidify his European conquests (e.g. the grand duchies of Würzburg and Frankfurt). The Congress of Vienna, undoing Napoleon’s work, showed a curiously similar predilection for grand duchies, creating a dozen of them in and near Germany. Of these, only Luxembourg has maintained its independence, and its grand duke.

[5] There has been a contingent of about 10 Luxembourgish soldiers stationed in Afghanistan since 2003, integrated with a Belgian battalion tasked with the defense of Kabul airport.

[6] In order: Gaston Thorn (1975-1976), Jacques Santer (1995-1999) and Jean-Claude Juncker (2005-present). The Eurogroup is the council of euro zone finance ministers maintaining political control over the euro currency. Luxembourgers also have their hands on the levers of power across the Atlantic. J. Dennis Hastert, speaker of the House of Representatives from 1999 to 2007, is a Luxembourgian-American. That same community produced a United States governor (Richard F. Kneip, of South Dakota), an Oscar winner (Loretta Young), a Nobel Prize laureate (the chemist Paul Lauterbur) and a baseball Hall of Famer (Red Faber). For more on this tiny but fascinating community, see the archives of the Luxembourg News of America.

[7] The name was long thought to mean “little fortress,” but the prefix could also refer to a type of fortified promontory known in German as a “Letze.” In the 19th century, Luxembourg’s heavily fortified Bock hill was known as the “Gibraltar of the North.”

[8] Presiding over a Golden Age for Bohemia, Charles is considered father of the nation in the Czech Republic. He founded the university in Prague that is still named after him.

[9] Concluded between France and Spain on Pheasant Island, mentioned earlier in this series.

[10] Which was installed and still operates as a condominium, previously discussed here.

[11] One monarch ruling over two (or more) distinct countries. The personal union between the Netherlands and Luxembourg ended in 1890 when William III left only a female heir. Wilhelmina became queen of the Netherlands, but as Luxembourg followed the Salic Law (allowing only men to the throne), William III was succeeded by Wilhelmina’s distant relative, Adolphe of Nassau-Weilburg.

[12] Banality is an excellent cloak for deviousness. Hence the even more abstract alternate name for this Euroregion: SarLorLux.

[13] Larger than West Virginia and more populous than Michigan.

[14] Its northern part was later also called Lotharingia, after its king Lothair II. Its southern parts included Burgundy, the Provence and the kingdom of (northern) Italy.

This post has been revised to reflect the following correction:

An earlier version of this article misspelled the Luxembourg national motto and incorrectly compared the land areas of Malta and Washington.